Dylan Russell is a partner in Hoover Slovacek LLP’s appellate and litigation sections. He has been Board Certified in Civil Appellate Law by the Texas Board of Legal Specialization since 2017 and was recertified in 2022. Only about 400 attorneys licensed in Texas currently hold this certification, out of over 100,000 licensed attorneys. Now in his 20th year of practice after joining the firm as a law clerk in 2002, his focus is on complex appeals and litigation.

In his appellate practice, he has presented over 25 oral arguments. He has argued five times to the Fifth Circuit, including twice in 2022, once to the Second Circuit in New York, and three times to the Supreme Court of Texas, as recently as 2022. In 2021, Mr. Russell briefed a petition for a writ of certiorari to the United States Supreme Court. He has also won two petitions for writ of mandamus at the Supreme Court of Texas. In addition to the courts mentioned above, he has briefed appeals in the courts of appeals in El Paso and San Antonio. As to Texas’s mid-level appellate courts, Mr. Russell has argued to the First and Fourteenth Courts of Appeals in Houston and the courts of appeals in Waco, Corpus Christi, Dallas, Beaumont, and Tyler. Mr. Russell has also briefed two bankruptcy appeals, presenting arguments in one of them, to the Chief Judge of the United States District Court for the Southern District of Texas, Houston Division. Mr. Russell has also attended trials, as appellate counsel, in federal district courts in Fort Worth and Houston and in a bankruptcy adversary proceeding in Fort Worth.

In his 2022 argument before the Supreme Court of Texas, the Court consolidated two class-actions cases involving tenant claims against apartments owners and a management company and a related permissive appeal regarding a claim under the Texas Water Code. The official video of the hour-long argument can be viewed below:

In his trial practice, Mr. Russell has tried cases as first chair in Harris and Montgomery Counties, including several jury trials in Harris County. He appeared in numerous federal and state district courts in counties throughout Texas, including in Harris, Montgomery, Fort Bend, Galveston, Dallas, Fort Worth, Liberty, Bexar, Travis, Brazoria, Williamson, Burnet, Hardin, Lubbock, Brazos, Denton, and El Paso counties, among others.  Mr. Russell also has appeared in federal courts and in state courts, pro hac vice, in states such as Florida, Missouri, New York, Connecticut, and Oklahoma.

OUTSIDE AND CIVIC ACTIVITIES:

PAST EMPLOYMENT AND PROFESSIONAL POSITIONS: 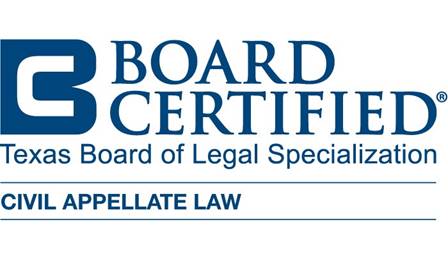